Sometime preparation is more exciting than the festival itself. Tihar, Nepali’s second biggest festival is probably one of them. The festival, that immediately follows Dashain, the biggest festival, is one of the highlights of autumn season in Nepal. Nepal’s autumn is normally not considered to be as colourful as the one in the west. To be honest, we don’t have the second spring with all those colourful maple leaves, mellow pumpkins and scary stories! However, autumn is not less exciting as we have Tihar, the festival of lights and flowers! Flowers at display in New Road! The street looks unusually quiet, thanks to the Traffic Management Team!

Preparation of Tihar is all about buying, buying and buying! So, as the days draw closer, you will come across an unmistakable crowd in almost every chowk of Kathmandu. The streets of main bazar get thronged with people from early morning. They get so full that if you can save yourself some space to behold the spectacle or can make it to the other end of the street without squeezing yourself, you are lucky! Flower vendors in front of Annapurna Temple at Ason chowk

As the festival is all about rituals, flowers, lights and delicacies, the shopping list goes really long. And equally long is the row of different stalls on the either side of the streets. The stalls are laden with flowers, jhilimili (electric lights, paper decoration etc), bhai masala (a concoction of nuts and dry fruits for brothers) and an exhausting array of ritual items. Every item is weaved with myths and is equally important. So people don’t miss any of them, which is why the shopping spree seems to be never ending. Evenings are really beautiful as the shops are lighted with all those colourful lights. If you are around New Road, you won’t want to miss the extravagant decoration of jewellery shops there. So walking down the streets during Tihar can be a rewarding experience as it offers you not just the fun of a festival, but also the chance to witness a different dimension of Nepali culture! Just be a bit prepared for the impatient crowd and unruly traffic, and the fun is all yours! Just name it, and we can do it: Stalls at Ason chowk!

Flowers are the foremost prerequisite for Tihar. The flowers used in the festival are exclusively sayapatri (marigold), godawari (chrysanthemum) and makhamali (globe amaranth). Sayapatri (literally hundred petalled), with its golden hue is the flower that matches the mellowness of the season. Sayapatri is used for both garlands and house decoration. Whereas, makhamali and godawari are used just for garlands only. It is believed that makhamali never gets withered. So, sisters offer makhamali garland to brothers on bhai tika, the fifth day of the festival, with a wish that their brothers would remain immortal like the flower. Array of marigold garlands at public footpath in New Road Why to worry if you can carry: A walking garland showcase in New Road

Another thing people don’t miss in Tihar is lights. Lights are used for both ritualistic and decorative purpose. People light their houses with colorful lights from Laxmi Puja, the third day of the festival. People use diyo (a small clay lamp with a cotton wick), candles and electric lights that come in different shape and size. Candles of different shape and size One of the main delicacies of Tihar is bhai masala. It is the concoction of nuts (cashew nuts, almond, raisin, walnut etc) and dried fruits, offered by sisters to brothers on bhai tika. A stall or shop without bhai masala is a rare sight. The shops and stalls are heaped with different ritual items ranging from walnut to seven colored tika. Some of the items that include the seemingly endless list are rato mato (red mato), amala (Indian Gooseberry), citrus fruits, coconut etc. Though it seems like a herculean task to know the name of all items at once, you would enjoy the neat arrangement displayed in all its glory! 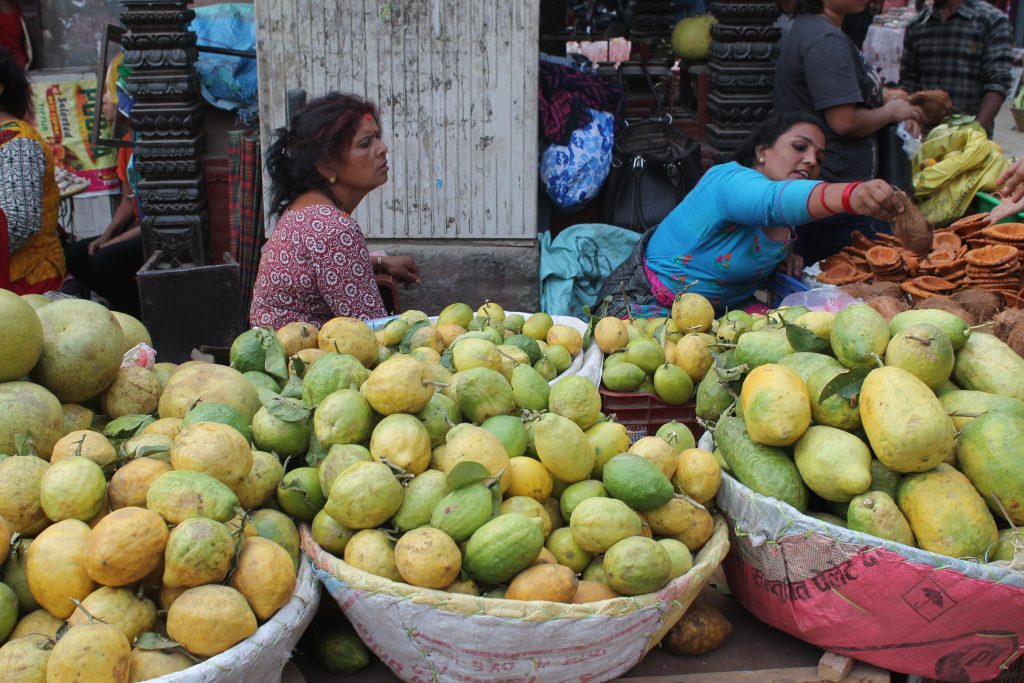 A type of citrus fruit used in Bhai Tika Dhaka Topi, national cap made from local fabric called Dhaka, is presented to brothers by sisters on Bhai Tika We could not have asked for more. The lodges were of a good variety and standard. Thank you for the experience of a lifetime. We really enjoyed ourselves and had a wonderful time!