Teej festival- the largest celebration of Hindu women in Nepal

Teej festival- the largest celebration of Hindu women in Nepal

Teej literally means “third” and the third day after moonless night of Srawan Month of Hindu calendar is an auspicious celebration of Teej. Teej is the biggest festival for Hindu women of Nepal. The festival falls either in late July or in early August according to Gregorian calendar. The festival that commemorates Goddess Parvati wedlock with Lord Shiva is observed for everlasting intimacy between married couples, well being of family and purgation of soul and body. A three-day-long festival allows delicious late night feast as well as tests endurance during 24 hour long tough fasting. Brother carries his lil sis to take her inside Pashupatinath Teej, women awaiting for their turns to get inside the temple A humble encounter- Hindu woman and a foreigner Western lady has a beautiful “mehendi” colored in her hand

The first day of Teej, Dar Khane Din (feast day prior to fasting) kicks off in a grand way. Women married and unmarried especially of Chettri and Brahmin ethnical tribes gather at their maternal locality. Everyone in red and green attire bedecked with jewelries gather at a place where they enjoy singing and dancing. Songs normally have words that describe the holiness and divine power of Lord Shiva. The musical celebration goes till midnight. Meanwhile, men of the maternal family host feast for their sisters, nieces, cousins and daughters offering them complete liberty to enjoy this particular day. After the feast, a 24-hour long fast begins. Teej, a traditional festival where women also express their pains through the lyrics of the songs they sing while dancing. 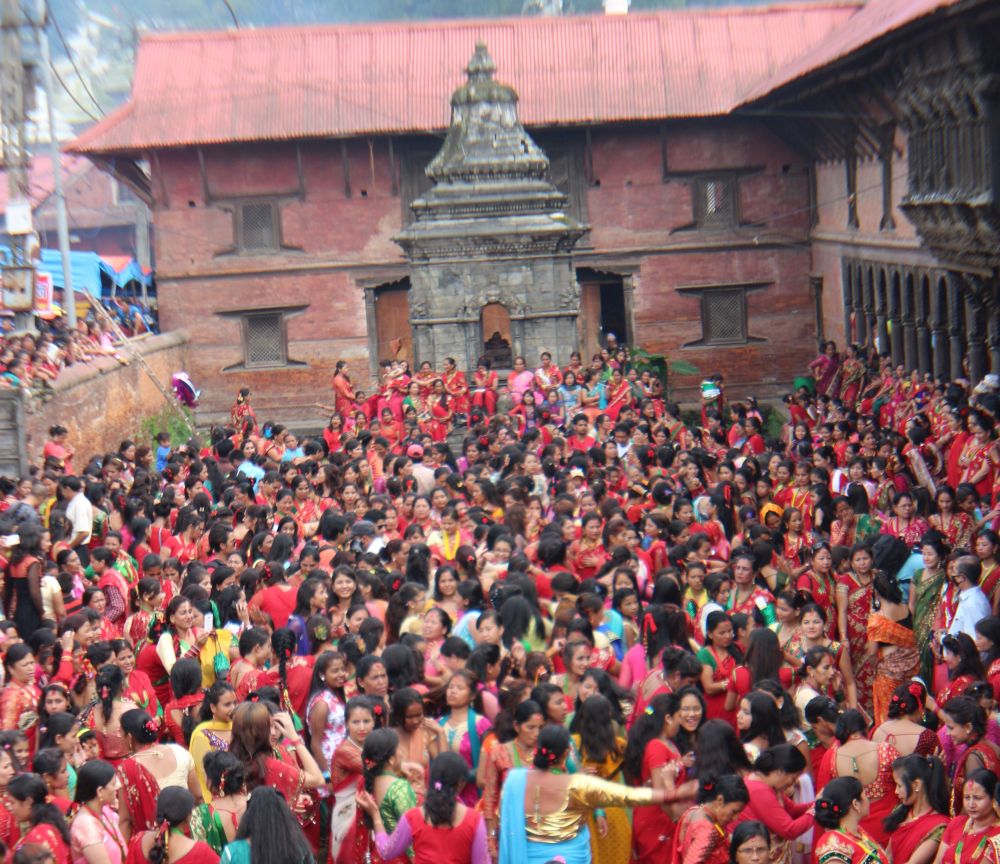 Let us all dance to please Lord Shiva Adorned with jewelries and flowers- Teej Give me some color- A Hindu woman having Mehendi 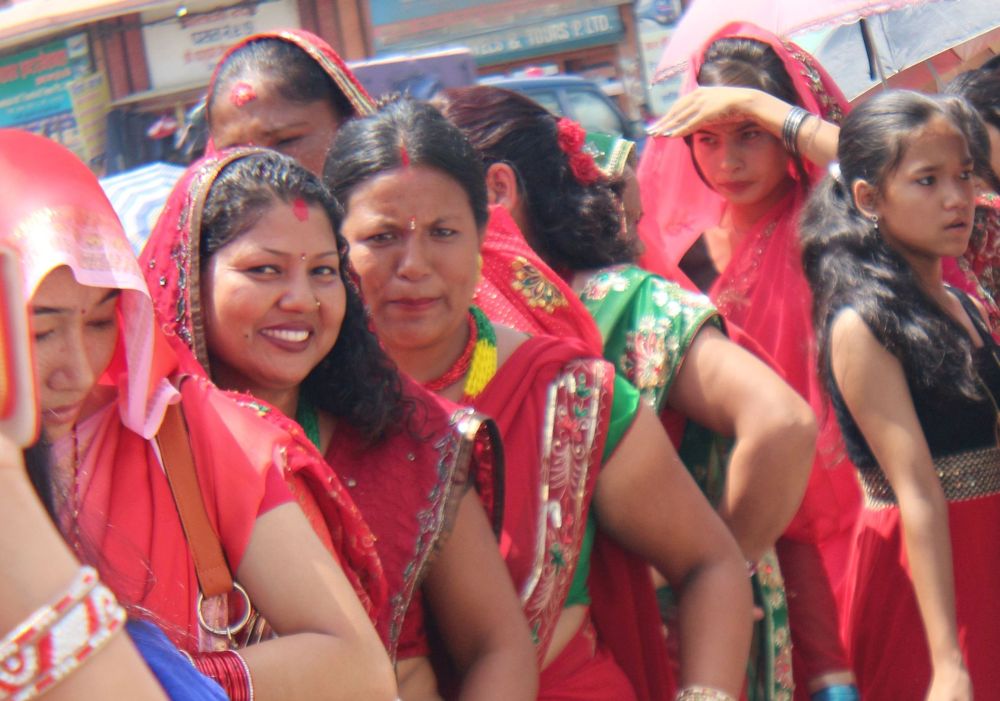 Hungry and thirsty still a smile dominates the face-its devotion

The second day of Teej is a fasting day. Some women go through tough fasting (24 hours without food and water) while others prefer liquids and fruits. Both married and unmarried women undertake fasting. Married women fast for the blessings of longlife, peace and prosperity of their husband and family. Unmarried fast to be blessed with rightful husband. Women sing and dance to the nearby Shiva Temple to be a part of mass fasting, dance and music.

The Final day of the festival is Rishi Panchami- a day dedicated to holy saints (Rishi refers to saints). After completion of prayer the previous day women satisfy seven saints offering them food, money and different gifts. They also offer prayers to saint deities bathing with red mud, and brushing with datiwan (a type of bush tree). This final ritual of Teej purifies body and soul of women freeing them from all their sins.

This temple dedicated to Shiva is painted red and green throughout during Teej. Several hundred thousand Hindu women throng to Pashupatinath. It looks like women hold 99% of total population of Kathmandu. Everywhere we see women and girls in beautiful red and green attires waiting to enter the temple. Inside the temple thousands stand in a line to enter main temple of Pashupatinath, thousands gather at a place to dance with the music and another thousands are wondering to figure out what to do next. It looks like a world of women devotee fasting hard for the longevity and prosperity of their men and family. Unique in a sense- women celebrate but worship a male deity and hardship of fasting women suffer is credited for well-being of men. Dance and Music at Pashupatinath 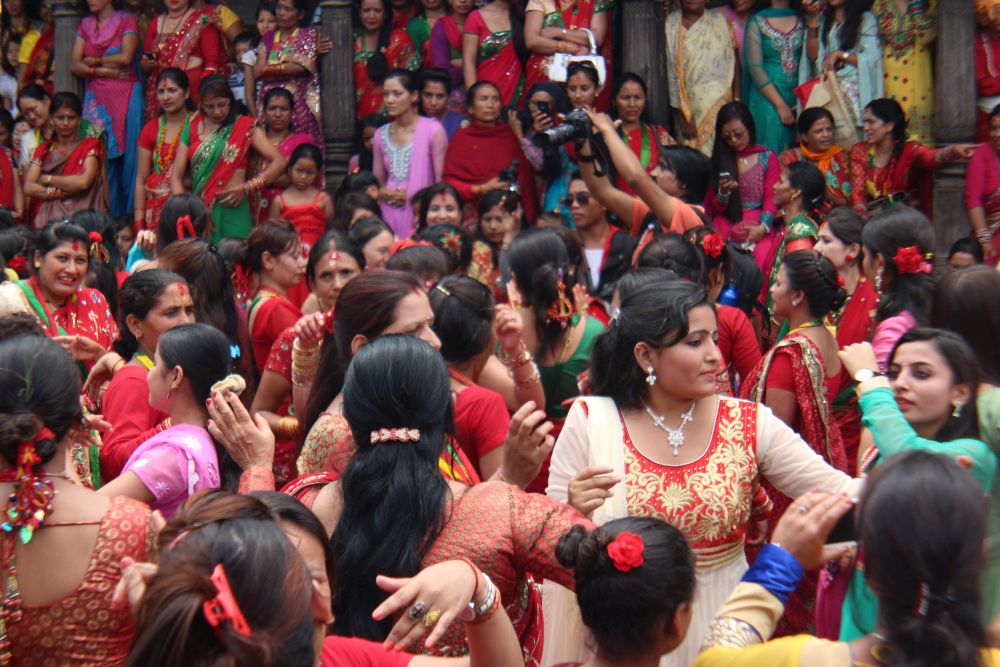 Legs won’t get tired neither the music stops

Festivals of Nepal, Teej,
« 35,000 plus Nepali converge to create biggest human flag in the world | Experienced trekking guide and mountaineer shares, Golden rules of trekking in Nepal »
Got tourism news & events to be featured?
Email: updates@explorehimalaya.com

There was excellent preparation before the trek. Samundra went over and beyond what we expected from him, and we really appreciate his excellent service.