Mr. Guimaraes Marcelo led the group of five Brazilian travelers to Nepal this spring. This holiday in Nepal covered the sightseeing tour of cultural city Kathmandu and naturally blessed town Pokhara. Apart from the cultural sightseeing tours of main touristic towns of Nepal, the holiday also involved the trekking to Annapurna Base Camp 4133m and Poonhill Ghorepani 3210m. Mr. Marcelo travel experience in Nepal was wonderful. He shared his holiday experience with us after the completion of cultural sightseeing tour of Nepal and trekking in Nepal.

There are several wonderful memories of this holiday to Nepal. The walk in the nature was great experience for the group and the trial from Ghorepani to Tadapani was exceptionally beautiful. The sunrise at Poonhill was nice and the snowy path from Machhapuchhre Base Camp to Annapurna Base Camp was special. The celebration of Nepali New Year at Bhaktapur was fantastic.

The service of Explore Himalaya was faultless. Meeting and handling was very good- everything was on time. The choice of hotels, the company made for our accommodation was perfect. Our guide Rupchan, was young but he was very experienced and gentle. Staffs of the company made us feel at home, away from home. Transportation was very comfortable and dependable.

We recommend Explore Himalaya to all travelers willing to travel to Nepal. It is a very good travel partner for all Nepal tours and trekking. Thank you Explore Himalayans.

First time in Kathmandu- Surprise to many shock to few Living with the Gods Boarding a plane to a very new place is often interesting. Throughout the flight a traveler draws an imaginary picture of the place. Once the plane lands and reality is before the eyes, it is nowhere close to the drawing in the brain. Exactly, encountering the unexpected or the least expected is the fun of traveling. And Kathmandu is one of the few destinations where several unexpected activities for a novice traveler take place every now and then. The most artistic doorway Wheels dominate the noisy roads, but medieval culture overflows in the neighborhood. Dust in the air but colors of celebration absorb the pollution. Modern malls built everywhere but still the ancient edifices count more. Traffic jam stretched to several 100 meters but the citizens hold unlimited patience to drive through. This is Kathmandu or the first perception over Nepal- for a novice traveler. Kathmandu is surprise to many and shock to few; disorganized technically but organized rationally. Deity resting on the ground My home is so beautiful Evil dies when I roar

Kathmandu, a UNESCO World Heritage valley holds three equally beautiful antediluvian cities which in medieval times were at Art War with each other. Kathmandu, Patan and Bhaktapur collectively house seven UNESCO World Heritage Sites along with 1000s of other temples and monasteries sprinkled in different corners of the valley. That is why Kathmandu boasts to be the City of Temples. Traveling back to medieval times is the exact way to describe the exploration of Kathmandu. It is a sanctuary of ancient sensual architecture, wobbly but still firm ancient structures, the complex wooden carvings, the sacred dome and pagoda shaped shrines and the peaceful courtyard where once the civilization thrived. The fun of getting lost in the lively squares of Asan and Indra Chowk demands a map to navigate a way to the main street. Kathmandu in short is a beautiful ancient maze bucketed with life. Rani Pokhari, in the middle of Kathmandu Kathmandu is a treasure trove. Arty and holy deity idols scattered everywhere demand the watchful eyes. These ancient treasures are everywhere; resting high on ancient buildings, tucked in temples doors, abandoned in an isolated ruins of the shrines. But most of these little treasures are found somewhere near to famous temples and monasteries of the city. Pashupatinath, the holiest Hindu Temple for death ritual in Nepal, Changunarayan, the oldest Hindu temple in the valley, the prevailing Boudhanath, said to be the largest stupa in the country, Swayambhunath, a peaceful Buddhist stupa set atop a hill are the major shrines in Kathmandu enlisted as UNESCO World Heritage Sites. The medieval Durbar Squares built in all three cities are also must explore UNESCO Heritage Sites while in Kathmandu. 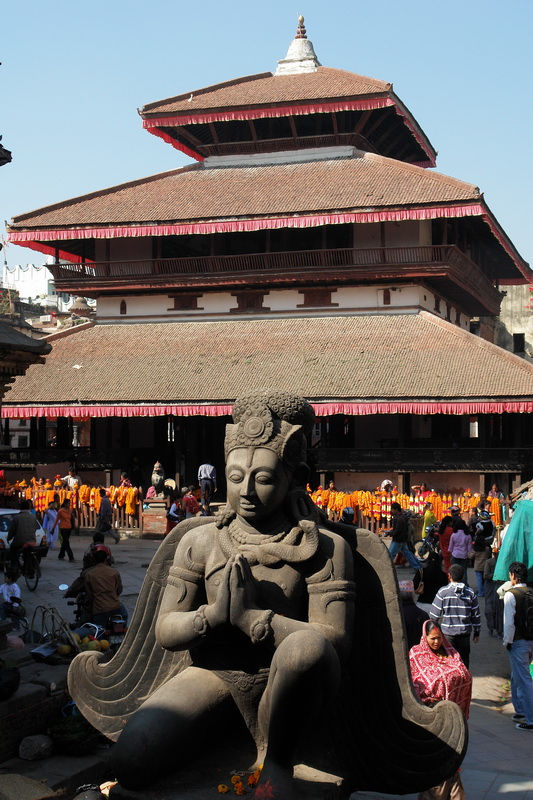 Gods live in and out of the temples Flowers for the Deities I have seat up in the sky

Kathmandu is chaotic yet captivating it is frenzied yet fantastic. A hub of culture, history and religion, Kathmandu has something for everyone. Tearing down the devil into peices Monastery and a temple in a same place Line of small temples in Pashupatinath British travelers Ms. Christine and Mr. Michael Patrick McDonagh recently were on Kathmandu and Chitwan Tour with us. They had an incredible experience during the private  day tour of the UNESCO enlisted Heritage sites of Kathmandu and wildlife safari at Chitwan National Park. Before their departure they had something to say about their holiday in Nepal with Explore Himalaya.

Elephant rides in the jungle of Chitwan National Park and visit to the outstanding Bhaktapur Durbar Square with such excellent guides are the best memories of our trip to Nepal.

The service of Explore Himalaya is excellent. Every time our Tour Officer turned up on time and he was very helpful. Dwarika’s Hotel, the hotel we stayed in Kathmandu was outstanding with superb staffs. Guides were very knowledgeable and articulate. Nothing bothered us throughout our trip in Nepal. We would fully recommend Explore Himalaya to all the travelers planning to visit Nepal.

Pilgrimage Tour to Nepal with Explore Himalaya, beyond expectation

Vishnu Narayanasamy from Singapore and seven other fellow travelers were recently on a holiday to Nepal with Explore Himalaya. The tour included the highly revered pilgrimage destination Muktinath, private day tour of Pashupatinath, Boudhanath and Bhaktapur Durbar Square in Kathmandu valley, the wildlife safari in the UNESCO Heritage Site Chitwan National Park and the sightseeing tour of the most beautiful city in Nepal, Pokhara.

After the completion of the holiday which comprised diverse activities Mr. Vishnu said few lines of admiration regarding their holiday to Nepal.

If I have to pick the best memory out of many, that would be the visit to Muktinath and obviously the bathing in holy 108 taps in Muktinath Temple premises.

Talking about the services of Explore Himalaya I would say, it was faultless. Meeting and handling was done beyond our expectation. Hotels we stayed in were clean and comfortable. Guides throughout our holiday in Nepal were very knowledgeable and accommodative and the field staffs of the company were always available. The team assigned to serve our group went out of their way to advice on sites and made the last minute changes due to unforeseen circumstances which we admire very much. We would recommend the fellow travelers to pick Explore Himalaya as their travel partner in Nepal.

The meeting and handling was quite satisfactory. The guide for city tour was quite nice and competent.