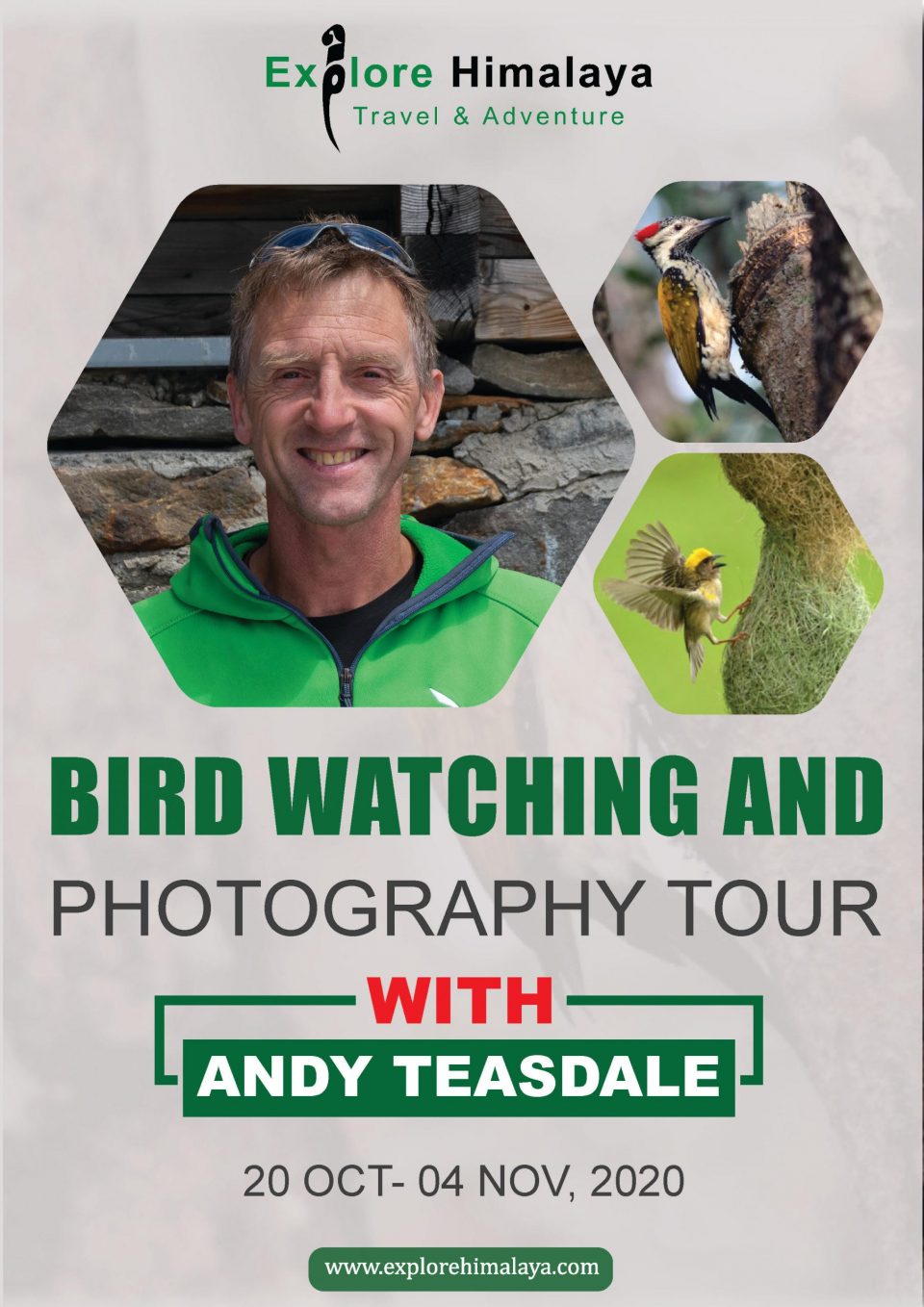 This trip offers you a wonderful opportunity to explore the rich bird life in Nepal. You begin your birding journey from Phulchowki Hill that lies on the outskirts of Kathmandu. With some 288 bird species recorded to date, Phulchowki is the most popular bird watching spot in the valley. The hike to verdant Shivapuri National Park will offer you glimpses of the Spiny Babbler and Hoary-throated Barwing. Taudaha Lake located in the southern part of the valley is a favorite nesting site for migratory birds and water fowls.

You take a drive to the scenic lakeside town of Pokhara and enjoy myriad activities including bird-watching. You further proceed to Chitwan National Park & Hetauda and spot many of the endangered winged creatures while indulging in exciting jungle activities. A total of 540 species of birds has been recorded at Chitwan National Park till date. The park is especially important for grassland species like the Bengal Florican, Grey-Crowned Prinis, Slender-billed Babbler and Lesser Adjutant. Hetauda situated at an altitude of 474m is a stopover point for high altitude birds like the Ibisbill, seeking a warm site in winter. Cattle egrets, swallows, mynah and bulbuls are resident birds.

Further you drive to the next destination, Koshi Tappu Wildlife Reserve which covers an area of 175 sq km and is in the eastern Terai region of Nepal. It is a beautiful and fascinating aquatic environment and is home to an astonishing variety of water birds that flock to its ponds full of flowering plants. The reserve provides an important habitat for a variety of wildlife but, in particular, water birds, including several migratory species such as the sarus crane from Siberia. In all, a total of 280 different species of birds have been recorded and these include many varieties of ducks, ibis, storks, egrets and herons, as well as the endangered swamp partridges and Bengal floricans. Koshi Tappu is also home to the last surviving population of wild water buffalo and its other inhabitants include blue cows, various species of deer, Gangetic dolphins and gharial crocodiles.

No doubt, this special 2 weeks’ tour provides you wonderful locations with high species count and best sightings. But most importantly, it also offers you an accomplished birding expertise of Andy Teasdale, a brilliant tour leader known for handling such remarkably challenging tasks.

A passionate photographer, bird expert, qualified Mountain instructor and International Mountain Guides Carnet, Andy Teasdale runs a company based in Snowdonia offering sheltered and joyful guiding service that provides special outdoor adventures including photography, climbing, walking, alpinism and ski touring in Snowdonia and the Alps. An ardent birdwatcher and outdoor adventure enthusiast, Andy spends a lot of time in the mountains of Snowdonia and the European Alps instructing, guiding and leading expeditions year round to the greater ranges.

Beside his profound interest in birds, his other photographic interests involve adventure sports and landscape.  Never away from his adventure ingenuity and his loved camera to capture the spirit, Andy feels that photography is the best way to enhance and immortalize stories and experiences. You can visit his Facebook and Insta pages to see an impressive collection of his engagements. Explore Himalaya is really proud to partner with Andy Teasdale for a bird watching photography tour during November 2020, a relief project to uplift Nepali tourism that is severely hit by covid-19 setback.

Our guide was very helpful and took very good care of us. He helped us in all matters.So also the driver… we can recommend them for other tours.