Adventure seekers have flown in the skies over Annapurnas in Pokhara, they have challenged the rapids of raging Seti River and they also have enjoyed the natural wonders in and around Pokhara. A small tourist town 200km west of Kathmandu is always in the mood to cater something very exciting to travelers across the world. While entertaining travelers and adventurers with half a dozen of aerial adventures, excitingly soothing water adventures and mild cultural explorations, Pokhara also has been hosting incredibly interesting triathlon event. Himalayan Rush, the introducers of Triathlon Event in Nepal organize Triathlon event in Pokhara every year since 2012 during the month of March, which is the beginning of tourist season in Nepal. 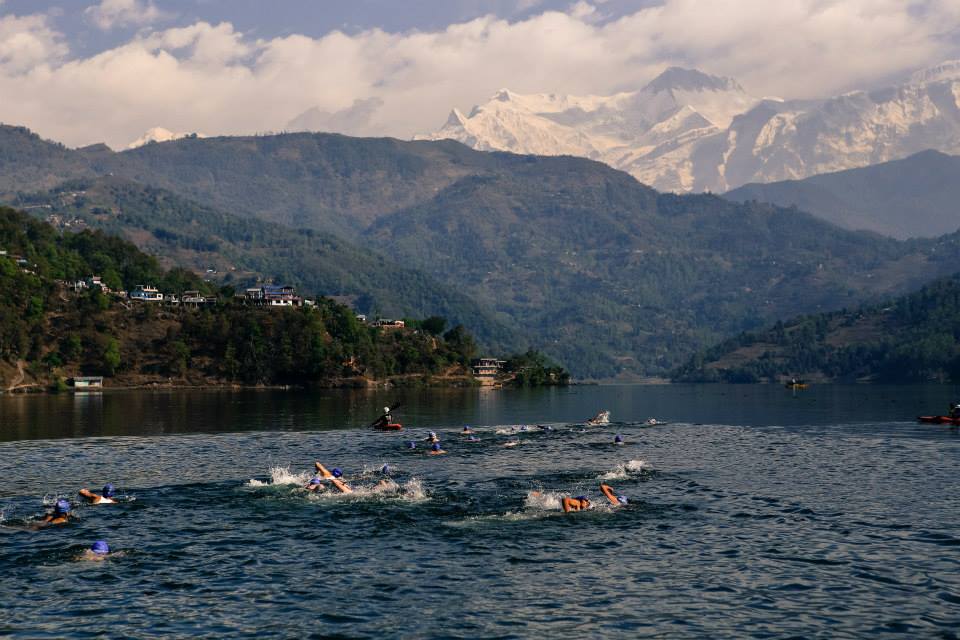 The event in the first year had only local participants. Gradually the kind of adventures like swimming in natural water, pedaling along the challenging uphill and downhill rugged terrains and running across the locals’ footprints it caters- the Triathlon in Pokhara is gaining popularity in a light speed and becoming a racing destination for triathletes across the world. Standard Triathlon in Pokhara begins with the 1.5 km swim across beautiful Begnas Lake that holds the amazing backdrop of MT. Fishtail and Annapurna. Then 40 km of cycling journey that at times becomes very challenging as it caters almost 1100m of elevation gain. So does 10 km of running, which also gains the elevation of 300m. Basically, the event begins with uphill ride or run in the beginning and ends with the downhill ride or run in the latter half. Apart from Standard Triathlon, the organizers also host Sprint Triathlon, which comprises half the distances of Standard triathlon in all activities. Duathlon skips the swimming part and caters 40km cycling and 10 running challenge. Team Relay covering the total distance of triathlon and 5km marathon are also activities the event hosts. So travelers if you are a good athlete and you want to give a try swimming in Nepal’s sparkling lake water, pedaling across tough geography and running along the narrow local trails – join the incredible triathlon event in Pokhara that begins on 26th March this year.

Triathlon in Nepal,
« A day full of love in Kathmandu with your valentine- Valentine Day special | How to prepare yourself for long & strenuous trek in Nepal? »

The meeting and handling was good. Our trek guide was very good, helpful and knowledgeable. We had a very nice trek. People around were very helpful and realistic about the trip. Happy indeed!