Trekking in the Himalayan regions of Nepal is an ultimate experience for trekkers visiting the country for the first time. To witness the beauty of, “The Mighty Himalayas”, first hand is for sure a journey of a lifetime.  Trekking in Nepal is the perfect way to get in touch with the nature and to feel the glory of the sacred Himalayas is a spiritual journey expressed by many trekkers. Everest, Annapurna, Kanchenjunga, Manaslu, Langtang and Makalu  among others are some of the famous trekking destinations of the country. During the trekking, ascending to the high altitude passes is a major highlight of the journey.  These high altitude passes are the landmarks that separate two remote regions nestling opposite to each other.  And in some trekking routes, these passes are the landmarks where you achieve the maximum altitude. Walking all the way to the high passes demand a high level of physical and mental endurance but the distance is definitely worth achieving.

In today’s post, we have highlighted the five most popular trekking passes of Nepal.

Thorung La is a mountain pass in the globally admired Round Annapurna Trek of the Annapurna region of Nepal. It is situated at the elevation of 5,416 meters and lies in the lap of Damodar Himal, north of the Annapurna. This pass lies on a trail, which connects the Manang District to the east, with the temple of Muktinath and the Mustang District to the west. Thorong-La is the highest point on the Annapurna Circuit which is a 300 km walking route around the mighty Annapurna mountain range. This pass is also an ancient route used by local traders to and fro Tibet.

Cho-La Pass lies in one of the adventurous trekking routes in Everest region of Nepal. The trail is the route to Everest Base Camp via Gokyo Lakes crossing Cho-La Pass at 5330 meter. This trek begins from Lukla and via Namche bazaar treading along the off the beat trail of Everest all the way goes to Gokyo Lake. After you reach Gokyo Lake you ascend to Gokyo-Ri at 5480m and then you cross the famous Cho La Pass 5330m to reach Dzongla. Continuing the journey you reach Gorakshep and ascent to Kalapathar at 5545m where you can get a close-up of”The Mighty Everest”. Then next day you trek to Everest Base Camp and return to Tyangboche, and back to Lukla airport.

One of the most frequented high pass during the treks in Dolpo is Kang La Pass 5100m. The pass lies between two major highlights of Dolpo; Phoksundo Lake & Shey Gompa. During the Upper Dolpo Trek, after enjoying the magnificent nature at Phoksundo Lake and Bon culture at its best at Ringmo, trekkers trek along narrowed trail right above Phoksundo Lake, followed by the jungle walk before the strenuous walk to the top of the Kang La Pass begins. From the pass, the sight of deep deserted valleys and Himalayan peaks of Nepal and Tibet are worthwhile watching. Sliding down the pass, the trail leads trekkers to another prime highlight of Dolpo; Shey Village. 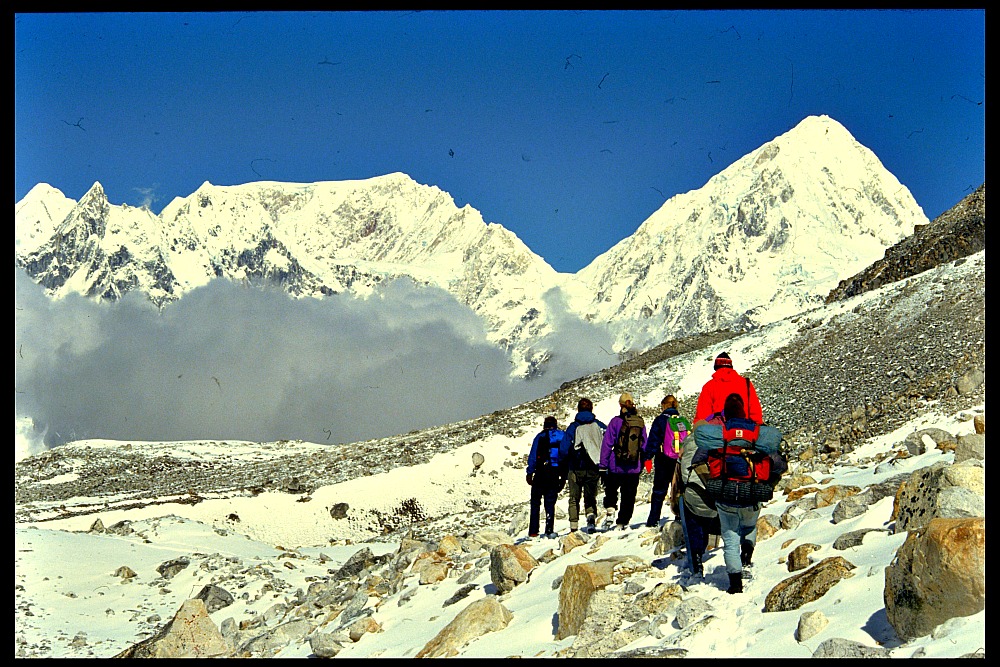 Larkya-La pass is one of the most impressive pass crossings in the Nepalese Himalaya. With the elevation of 5,200m, Larkya-La pass is the highest point of the 18-day Manaslu circuit. The trail, starts from Arughat or Gorkha, where ethnic diversity can be witnessed at its best.  Larkya-La is not the highest of the trekking passes of Nepal, but it carries its own challenges. The trail demands 10 hour a day hike; which includes four or five hours of rough and exposed terrain. But at the end of the day Larkya-La pass is a journey worth achieving as the magnificent beauty of from the acme of the pass is a glorious site to see. Ganja-La Pass trekking is one of the challenging trekking routes in the Langtang Himalayan region of Nepal. The trek starts from Syabru Besi and follows the way to Langtang Valley trek to Kyanjin Gumpa. The panoramic view of Langtang Lirung (7225m), Ganesh Himal (7406m), Naya Kang (5844m), Ganchempo (6387m) and Yala Peak (5500m) is a magnificent sight to witness. Followed by; Kyannjing Ri and Tserko Ri, Glacial moraines and to the Langtang base camp. After Kyanjin Gumpa trail descent to Langtang River. And then ascend to the Ganja-la Base camp (4460m) to Ganja-la High Camp (4960m) and Ganja-La Pass (5130m). The view of Langtang Himalayan region and Tibetan Himalayan range as a Langtang Lirung (7225m), Naya Kang (5844m), Ganchempo (6387m), Yala Peak (5500m), Shisha Pangma (8013m) are the highlights of the trail.

Our tour guides and drivers in Lhasa and the rest of Tibet did an excellent job. They were friendly, knowledgeable, good humored and we had a feeling that they did their best to make it a very good trip!