Monsoon season in Nepal brings joy and happiness for everyone. It is the main season for agriculture as well as the season of the festival in Nepal. A monsoon festival falls on different date every year. 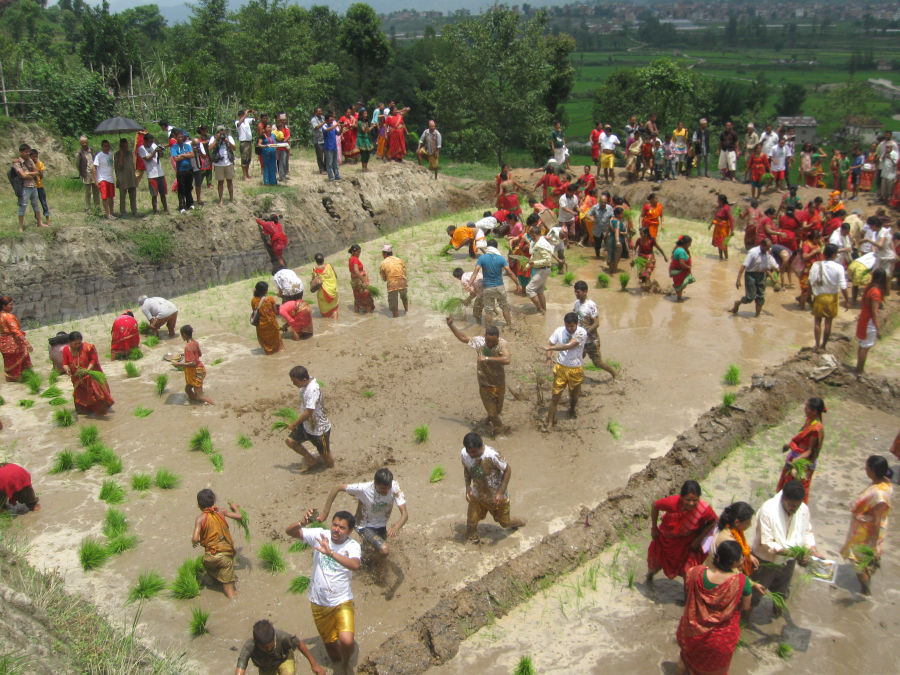 15th Ashar (June) is celebrated as Paddy Plantation day  “RopaiJatra” all around Nepal. “RopaiJatra“is a most awaiting and cheerful time for farmers. This day symbolizes the end of the rice planting period, a day when all farmers enjoy the end of the plantation of rice and wishes for good production. As an entertainment, they will sing a Nepalese folk songs and dance in rhythm on field while cultivating the crops mainand as lunch they will have homemade yogurt and beaten rice and drink a special kind of local drink called ‘Chyang’, which basically is made up of fermented rice.

On this day, especially Pokhara and Kathmandu (being a touristic area), different programs are being held targeting the foreigners, on the muddy flied to show Nepalese culture and traditional way of farming. This festival has been able to attracted many tourists though the festival is quite weird, yet fun. And the number of tourist wanting to participate on this festival is increasing. On this day especially for the foreigners, a travel and tour offices organizes a program/event for “Paddy Plantation” festival. This program is all about planting rice, playing around with mud, dancing in a traditional Nepalese folk song and not to forget to test traditional foods. Not only that, you can have an opportunity to communicate with Local Nepalese families which will help to learn about the Nepalese life style, culture and tradition.

This following year Nag Panchami and JanaiPurnima festival falls on same day.The festival Nag Panchami,Picture of Nags is posted above the doors of Nepali households with the belief of keeping away the evil spirits.

Normally, the priest visit door to door carrying the poster of Nags, Dubo (Cynodondactylon. Priest paste the poster of Nag with the help of cow dung, post a coin and Dubo. People offer milk in the temples of Nag Pokharai (snake pond) Naxal /Kathmandu and NagDaha (Snake Lake) in Lalitpur. According to the Puran”Ancient Scriptures”, the earth is lifted by Shesh Nag on his head with Lord Vishnu Sleeping on its coil inside the ocean. Shesh Nag, BasukiNag,KaliNag,AsthaNag,Padma Nag and Karkot Nag are the most powerful Nags in Hindu religion.

Ancient Scriptures also mentioned that without Nags, the rainfall will not be possible, that’s why people worship Nags for causing the rain fall.

On this day every Hindu/Buddhist tied a Yellow, red colorful cotton strings in wrist of right hand. Nepalese people call it Doro.Especially Brahmins and Chettri change theirJanai, once a year. White cotton string wears on his chest or tied around the wrist of his/ her hand.  In every house this day, cooks mixed of every grain Quawati “and eat together with family members.

Similarly, this is also a day of Rachaya Banda, Rachya means to protect and Bandan means bond of togetherness. Where sister tie the rakhi on brother wrist, pray for the long life and success of her brother.Brother promise sister to protect from every harm and give gifts and sisters Gaijatrais the festival of cows is one of the most popular festivals of Nepal. GaiJatra festival came in the tradition of the medieval period of Nepal, under the reign of the kings JayasthitiMalla. According to traditions since time immemorial, every family who lost a family member during one year period must participate in a procession in the streets.Bhaktapur, Kathmandu and PatanNewar community follow this tradition. If a cow is unavailable then a young boy dressed as a cow is regarded as a fair substitute.

In Hinduism, a cow is regarded as the most respected among all pets. It is believed that the cow, venerated as a sacred animal by Hindus, will help the deceased parent’s journey to heaven. Krishna Janmastami is one of the popular festivals in Hindu religion. It is a festival celebrated as the birthday of Lord Krishna. Krishna is believed as the eighth incarnation of lord Vishnu and powerful. It is celebrated as victory of good over evil and their power.

All the devotees gather in Krishna Mandir, the ancient Krishna Temple in Patan other temples which is the symbol of Lord Sir Krishna. Teej is also known by the HariTalikaTeej. It is biggest festival and celebrated by Nepali women all across the world. Every Married women,Child and Young girls wears red and green attire decorated with jewelries gather at a place where they enjoy singing and dancing. Songs normally have words that describe the holiness and divine power of Lord Shiva. The musical celebration goes till midnight. Meanwhile, men of the maternal family host feast for their married sisters and daughters offering them complete liberty to enjoy this particular day. After the feast, a 24-hour long fast begins. Teej, a traditional festival where women also express their pains through the lyrics of the songs they sing while dancing.

According to the Holy Purans say that “on this day the Himalaya’s Daughter Goddess Parbati had finally receive Lord Shiva after her long time of devotions towards him.From this day, Teej festival was celebrated.

Married women’s take fast for the long life of their husband, good health of their children. And young ladies take fast in desire to get their dream husband.

Rishipanchamiis the last day of Teej and women worship Sapta Rishi (seven saints). In Hindu religion, menstruation is taken as a symbol of impurity and women are not supposed to take part in religious performance during their periods. Hence, it is believed that Rishi Panchami is the occasion to wash off one’s impurity of the entire year

Indrajatrais the celebration of God Indra” the god of Rain, King of Heaven”. This festival begins each year from the day of BhadraDwadasi to Aswin Krishna Chaturdasi according to the lunar calendar, which falls during place to celebrate is in Kathmandu Durbar Square which is known as Basantapur Durbar. 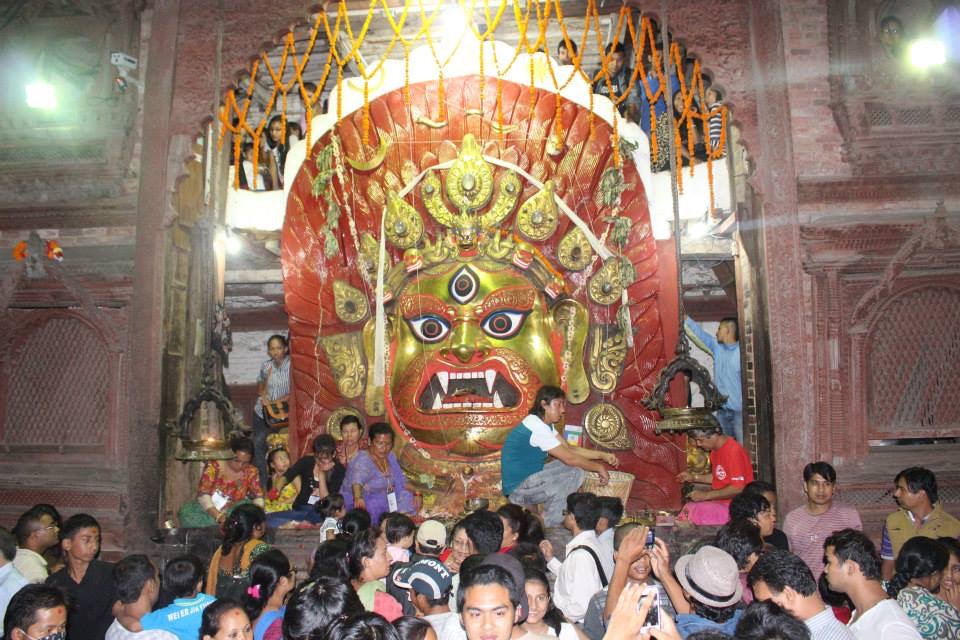 The Kumari (living goddess), departs the shelter of her temple in a palanquin and leads a parade through the streets of Kathmandu to thank Indra. The main attraction of the festival is the procession of chariots and masked dancers representing deities and demons.

According to myth, Indra’s mother Dagini wanted night-flowering coral jasmine “PARIJAT” tree in the gardens of heaven to perform some ritual and Indra disguised as human and came to Earth for the plant. While Indra was stealing the plant from a garden in Kathmandu Valley, the communities captured him. Unknown to the fact that the God of Rain was captured Kathmandu suffered extreme dryness; however, the capturers would not free Indra. Dagini came down to the earth in search of her son and discovered that the people of Kathmandu held him caged