There are more festivals in Nepal than the number of days in one calendar year and there are more reasons to celebrate than to mourn on one natural disaster we have faced. Celebrating our culture as we used to celebrate it in the past and at the meantime focusing on rebuilding the country devastated by the quake is what Nepalese are doing and will do.

After the powerful quake of April 25, the first major celebration Ropai Festival (Rice Plantation Festival) is about to bring some happiness amongst the Nepalese. Traditional way of farming in Nepal

If you are in Nepal, be the part of Rice Plantation Festival or if anyone you know are in Nepal inform them to visit the nearest site of Ropai Festival.

Nepal grows 5.3 million metric tons of rice every year. The staple food of almost all the Nepalese, rice is planted observing an interesting festival – Ropai. Modern technologies have replaced the traditional rice plantation process in most of the countries and some urban parts of Nepal. However, there are places in Nepal where rice plantation is still a jubilant festival that is observed in the most traditional way.

30th June the beginning of Monsoon in Nepal brings good news to all the farmers across the country. Melodious ropai songs tuned with traditional five musical instruments (Panche Baja), splashing mud and water to the fellow workers in the rice fields and sowing the seeds of rice that feeds thousands people of urban areas, Ropai is truly a unique celebration bringing smiles in the faces of hardworking farmers. The fun side of Ropai

Ropai in the recent years has been one of the biggest cultural explorations amongst the international travelers, who are in Nepal during the monsoon.

Not only the foreigners, the young Nepalese from the cities drive to the destinations on 30th June where this unique farming festival of mud, water and music is celebrated. Ropai Festival is also remarked as the day of eating curd and beaten rice amongst the farmers of Nepal.

The team of Explore Himalaya will visit the Ropai Festival this year. Our site visit aims to capture the moments of Nepalese celebrating this festival with great enthusiasm despite their hearts filled with pain after the powerful quake of April 25. 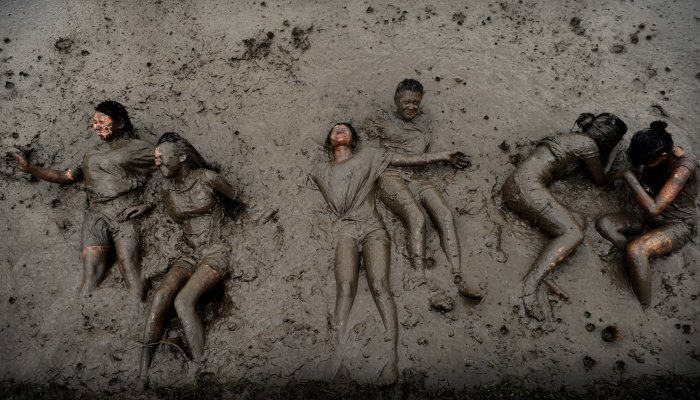 Even during the worst consequences, Nepalese have stood up in such a way that the world can’t stop admiring the resilience of Nepalese. Please do wait for our blog on Ropai Festival 2015, which will be posted on July 1st.

Ropai Festival in Nepal,
« Let your feet walk to help Nepalese stand on their feet- Travel Nepal after the earthquake | The Big Game – Trip Report »